Congratulations, on your new position as Head of School of Willow Oak Montessori. How are you settling in? Thanks and by God’s grace, I’m very much enjoying NC with its tropical weather, plush greenery, the warm welcome from the Willow Oak Montessori (WOM) community (see picture below)…and the kicker: the “light traffic” patterns during “rush hour” are amazing! 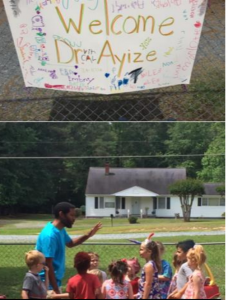 It’s not common to see a male with a classroom assistant’s certificate. What were some of your takeaways from that training?
Before answering that question, I’d like to take a moment to share how this training developed. When I was fortunate to assume the leadership role at Shining Stars Montessori Academy (SSMA) in D.C., I quickly realized that many of the administrative team members did not fully understand the Montessori Method, including myself. So, collectively we decided to enroll the entire administrative Team, including myself, in the Primary Assistant certificate course in order to absorb the Montessori philosophy as much as possible. I was moved by Dr. Montessori’s child-centered intentionality, her scientifically focused method and her spiritually grounded pedagogy. In fact, hopefully, for a forthcoming Montessori Today article that I’m currently working on, another Montessori educator (Sylvia Townsend who was the Director of the CHAMP Montessori TEP (Teacher Education Program), described her observation of Montessori saying the “[M]ethod fit our yearning…for another approach to educating our [Harlem community] children” (S. Townsend, personal communications, July 17, 2019)…she continues…”there was a somewhat of a spirituality attached to the Montessori Method. It felt to me like the Method spoke to our children [saying] – we see you, we respect you, you have the greatest of potential” (Townsend, 2019). Suffice to say, I was significantly impressed by that Primary Assistant’s training and those are some of my takeaways from that training.
You started a public Montessori charter school in Washington, DC. What motivated you to begin a charter school?
I sincerely believe that God has moved me to this current place of Montessori leadership and to be involved with the founding group of SSMA in D.C. While in undergraduate school, at Morehouse College in Atlanta, GA, I realized that helping to erect a liberatory educational system was a life purpose that could positively impact the continuum of history for our children. This realization inspired me and some schoolmates to open an independent school in Atlanta and seek to replicate it in DC. Furthermore, this vision inspired me to relocate to DC, where I met, married and raised children with a beautiful woman, and then twenty years after relocating to D.C., I was approached by a group of parents, from the educational non-profit that I co-founded, who asked if I would be interested in starting a school. Given that I had originally moved to D.C. to start a school, but had been a little side-tracked, I jumped at the opportunity and we triumphed on the first attempt with securing our school’s charter. So, long story short, I was motivated by the Divine and solicited by parents to start that school.
How do you see the traditional educational and Montessori landscapes changing over the next 20 years?
My hope is that the Montessori movement will embrace and begin to systematize some of the justice issues that are currently burning within the hearts of many. In your earlier question, you noted that “it’s not common to see a male with a classroom assistant’s certificate” and this demonstrates one of the justice issues that is ravaging the educational arena –sexism. Is it “not common to see a male [in the] classroom” because PK-12 education is viewed, by many in power, as “women’s work”? And because it’s often considered “women’s work” does this relate to another pressing justice issue—wealth distribution? So, if the ‘powers that be’ consider PK-12 education as “women’s work,” then they can justify allocating fewer resources and lower pay to the teaching field. This appears to be the reason that the majority of women working in the educational industry are receiving relatively low-wages as well as low-social status and this may be why half-a-dozen states recently had teachers striking. Therefore, better pay, more men and more people of the global majority as teachers and educational leaders are my hopes for the landscape.
You will be presenting at the Montessori Alliance of North Carolina’s October conference. What can attendees look forward to in your presentation?
This exciting panel #EquityMatters! will discuss some of the lessons learned, bruises endured and victories experienced at Willow Oak Montessori (WOM) given our commitment to equity work. However, to be clear, we are far from perfect at WOM but the hope is that the panel will help others to realize that you don’t have to be perfect and have everything in order to commit to embarking upon an equity journey.
What types of schools did you attend as a child, and how has that shaped who you are today?
I attended traditional public schools in New York city, until I graduated from high school and I do believe that it had an indelible impact upon my formation. I was tracked along with the masses of people of the global majority into “general studies” classes, while my White and Asian peers were tracked into “medical/law studies.” And but for the Grace of God, I also would have been tracked into the “general” place of failure that many, traditional public-school students of the global majority, find themselves. But instead my former History Teacher saw that I had some potential and she began to push me towards excellence. Her taking an interest and “holding me to a high standard of excellence” changed my life and she even encouraged me to go to a small HBCU (historically Black college and university) in Atlanta. In retrospect, I experienced some of the peril of the “tracking system” but I also experience the blessing of guidance from having a great teacher. Hence, those experiences have helped me to realize that all of our students should not be “tracked” but allowed the independence to blossom, which many Montessori environments foster, and all of our students should be provided the guidance of a great teacher who hold them to excellence (see picture below of some of my great teachers, including my high school History Teacher, who attended my doctoral graduation). 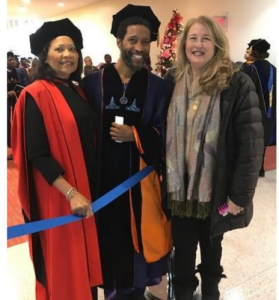 Dr. Sabater can be contacted at asabater@willowoakmontessori.org.

Webinar: From Peace to Equity, pt. 1